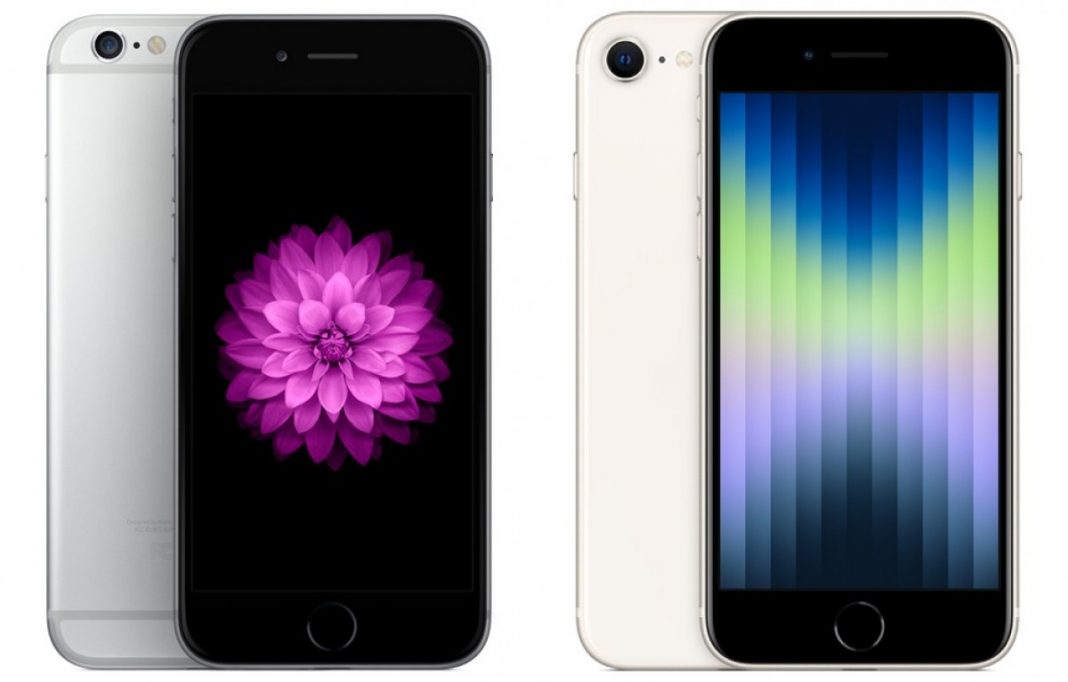 Earlier this week Apple announced the iPhone SE (2022) – the third generation model in the series that spans 7 years. We have already talked at length about the original iPhone SE from 2016, but in truth the new model isn’t really a sequel to that one. No, both the second and third SE models are based on the design of the phone that we will talk about today.

And that is the Apple iPhone 6, which (ironically) is older than the original SE – the 6-series arrived in 2014. Of course, the SE itself was based on the iPhone 5 from 2012, a game-changing phone in its day. If you look at the iPhone 5 and the iPhone SE (2016) side by side, you will barely be able to notice any differences.

The same goes for the iPhone 6 and the iPhone SE (2022). It has the same rounded silhouette and almost the exact dimensions – the differences are less than a millimeter. The phone still has a 4.7” display, still with 750 x 1,334 px resolution (and 326 ppi pixel density to make it a Retina Display, something the 4 introduced).

The chunky bezels above the below the display remain, the bottom one of which holds the sole remaining Touch ID fingerprint reader on iPhone. iPads have front or side-mounted readers too, but Apple’s phones have long since moved on to Face ID. Since the iPhone X (from 2017), in fact, a hated but influential design decision. One that Apple may never undo as analysts predict the company will turn the notch into a punch hole and then push the Face ID module under the display. An under display fingerprint reader does not sound likely.

Fingerprint readers do have their uses. For example, you can’t confuse one by wearing a mask and that is something that Face ID has been struggling with. Also, if you’re nimble enough, you can put your thumb on the FP reader while pulling the phone out of your pocket and it will be unlocked by the time it is in front of your eyes. This works especially well when it is a physical reader that you can feel by touch rather than something hiding under the glass display.

To be fair, some things have changed since the iPhone 6. In fact the change happened on the iPhone 8 – did you notice the antenna lines on the back of the 6? Those are there because the iPhone 6 had an aluminum back, which blocks signals. More recent Phone models (since the 8 and X generation) have glass backs, which simplifies antenna placement.

Other things have changed too, the SE phones now have IP67 ratings for dust and water resistance (they can last for half an hour under 1m of water). The new SE also gained a Ceramic Shield glass for the front, which is more durable than typical glass (more durable than even Gorilla Glass, if you believe Apple’s marketing). The iPhone 6 had “Ion-strengthened glass” instead.

There was a single camera on the back (it was the iPhone 7 Plus that added the second camera), but the 6 Plus was the first iPhone to offer Optical Image Stabilization (OIS). That was its one camera advantage over the vanilla 6. However, both the 6 and the 6 Plus could shoot 1080p video at 60 fps, while the 5s from the year before could only do 30 fps. Phase detection autofocus was another upgrade over the 5s, which only had contrast detection AF.

Some might have hoped for a second camera on the iPhone SE (2022), but Apple really didn’t stray too far from the iPhone 6 design. The new SE has a much better camera, of course. It has a higher resolution sensor (12MP vs. 8MP), a brighter aperture (f/1.8 vs. f/2.2) and OIS, not to mention an Apple A15 chipset that has much, much more number crunching power to throw at image processing.

Also, the selfie camera was bumped up to Apple’s old 7MP unit. That’s better than the 1.2MP cam that the 6 had, which really was only good enough for FaceTime video calls. Newer iPhones (since the 11 series) have 12 MP front cameras with wider lenses. But even the latest models don’t have Center Stage, Apple’s clever system that uses the wide-angle lens to always keep you in the center of the frame even as you move around.

Having mentioned the Apple A15, we should note another major change – the SE model now offers 5G connectivity. 4G was a relatively fresh feature for Apple when the 6 came out, it was introduced with the iPhone 5 in 2012. As we mentioned before, metal and antennas don’t play well with each other, something that Apple found out the hard way with the 4 and the whole “antennagate” scandal. The proper design was figured out before the iPhone 6 came out, though.

The iPhone 6 series introduced NFC to Apple’s line-up. It was still quite locked down compared to the functionality offered by Androids – dedicated exclusively to Apple Pay.

The iPhone 6 generation had its own “gate” scandal. The way that the all-aluminum body was designed created weak spots around the buttons, which made the phones easier to bend if you sit on them or apply force on them in another way. A related issue was that the touch screen could become disconnected form the motherboard. There were other problems too, ones related to the flash storage and the frustrating “Error 53” that plagued the Touch ID fingerprint reader.

Going back to the chipset for a moment, the Apple A8 was the company’s second chipset with a 64-bit CPU (the A7 inside the iPhone 5s was the first). However, even these chips can’t run the latest iOS (support for them ended with iOS 12). Newer models (e.g. iPhone 6s, the original SE) do currently run the latest iOS 15.

Before we wrap up, a few audio-related things we wanted to note. The iPhone 6 had a 3.5mm headphone jack, something that the iPhone 7 series took away two years later. However, it also only had a single speaker, while newer models (SE included) have stereo speakers.

It wasn’t perfect, but the iPhone 6 series reached a record-breaking 10 million sales over the weekend after launch. A week later the number rose to 13 million units. And this was before the series reached some major markets (e.g. China).

It’s safe to say that superficially the design of the iPhone SE (2022) is nearly identical to that of the iPhone 6, which will be eight years old soon. Looks can be deceiving, a lot has changed since 2014’s finest iPhone. Most importantly, the flaws of the original design have been fixed and many improvements have been implemented. Looking old-fashioned is not something that can be fixed without moving forward a few years to the iPhone X derived designs.

Exclusive: Apple currently has no plans to release a new, larger-screen iMac