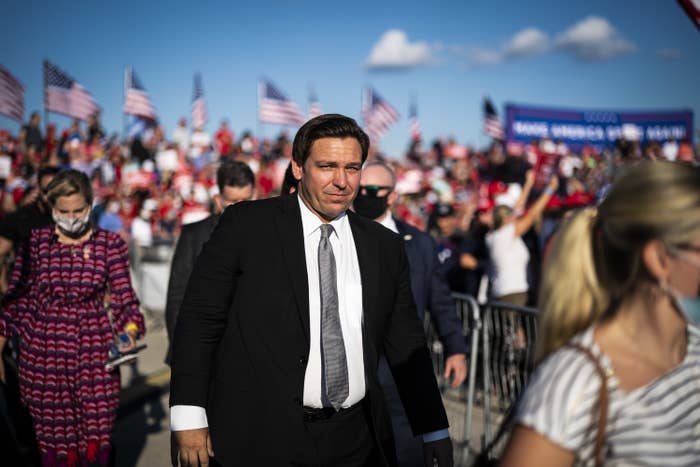 The bill comes as Republicans continue to prop up Donald Trump’s lies about election fraud.

The new, taxpayer-funded Office of Election Crimes and Security within the Department of State will have a staff of civilian investigators tasked with looking into claims submitted to Florida’s voter fraud hotline. Additionally, the bill will require the governor to appoint at least seven “special officers” — that is, members of law enforcement — to investigate allegations of election fraud (the governor already has this power, but this bill would mandate it).

Republican Gov. Ron DeSantis, a potential 2024 presidential candidate, pitched the idea for the office late last year and is expected to sign the bill, though it’s a slimmed-down version of his initial proposal.

It’s not clear why any of this is necessary. Voter fraud is extremely rare and there is no evidence of widespread issues in the 2020 election in Florida, which Trump won. The state’s voter fraud hotline already exists and its Department of State is already empowered to investigate claims of voter fraud and refer cases for prosecution. Florida has already conducted official audits of the 2020 election, which, in DeSantis’ own words, they “passed with flying colors.” Just after Election Day, DeSantis declared Florida an example of how to run elections properly, saying the state “inspires confidence” and that “perhaps 2020 was the year that we finally vanquished the ghosts of Bush vs. Gore.” His office did not respond to a request for comment.

But creating a statewide agency called the Office of Election Crimes implies there is a statewide-agency-level need. And it’s part of a pattern of Republicans across the US baselessly perpetuating fears about election fraud in the wake of Trump’s loss. Legislators in Arizona, Wisconsin, and Pennsylvania have launched investigations into the 2020 election, helping to spread conspiracy theories, while Republicans in Arkansas, Georgia, Iowa, and Texas have passed legislation to increase criminal penalties for election workers, all in the name of “election integrity.”

“They’re all part of the same playbook,” said Daniel Griffith, policy director for the voting rights group Secure Democracy USA. “All of those are really designed to kind of undermine the process, to go ahead and preemptively cast the seeds of doubt on the results of the 2024 election. And I think, more generally, call into question the election process.”

The Florida bill is very light on details of how the Office of Election Crimes and Security will be run. It does not, for example, say how much this will cost or how many investigators the office should hire, though an analysis conducted by House staff estimates about $2.6 million will be needed for the first year with another $2 million annually thereafter. Griffith also said that legislators have discussed the office having about 15 staff. The legislation does require the office to submit a report on the complaints it received and how many it investigated to the governor and legislative leaders every January.

Griffith noted that the Florida bill doesn’t “put a lot of guardrails” on the Office of Election Crimes’ investigators, or their law enforcement partners who will have the “full force and authority of police.” And he’s concerned about what effect that kind of law enforcement presence in the voting process could have on voters. “Obviously there’s certainly a negative history of the involvement of law enforcement, especially in the Southern states,” he said.

Aside from creating the Office of Election Crimes, the bill passed Wednesday makes some other changes to Florida elections laws, including a provision that changes the name of ballot drop boxes in Florida law to “secure ballot intake stations.”

The Importance of Choosing the Right Bathroom Accessories