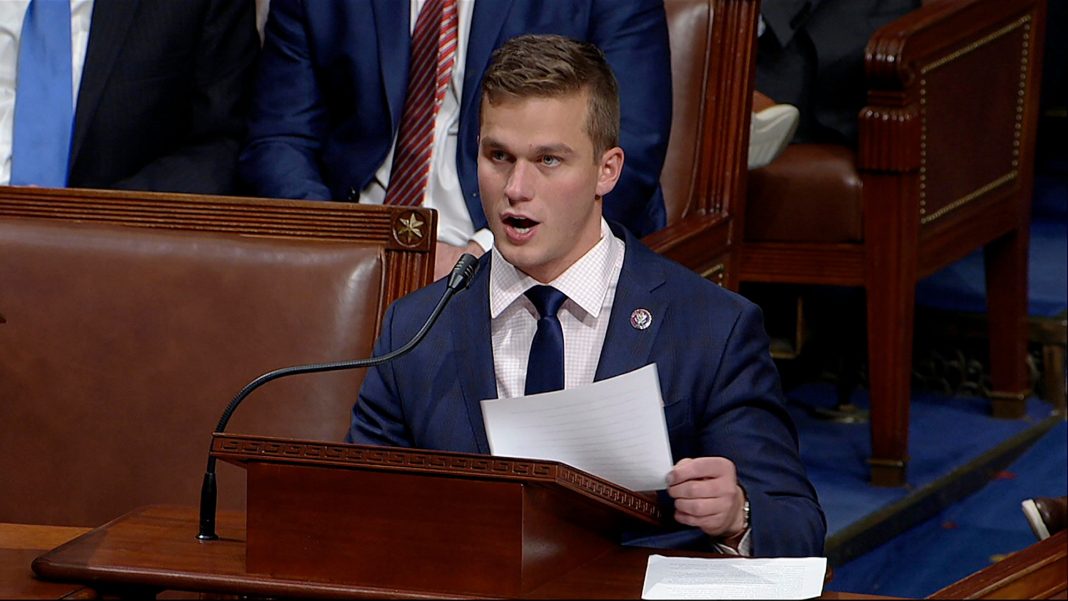 RALEIGH, N.C. — U.S. Rep. Madison Cawthorn of North Carolina told supporters he thought Ukrainian President Volodymyr Zelenskyy was a “thug”—a comment that runs counter to the overwhelming share of Republicans with a favorable view of the leader fending off a military invasion from Russia.

It was unclear where the video was taken. Cawthorn had a number of events in the state over the weekend.

On Thursday afternoon, one hour after WRAL reported the comments, Cawthorn appeared to walk back his remarks, saying on Twitter that Russian President Vladimir Putin’s actions are “disgusting.”

“I am praying for Ukraine and the Ukrainian people,” he added.

He also sought to justify calling Zelenskyy a “thug” by accusing the Ukrainian president of pushing “misinformation on America.” He posted a link to a conservative blog post with examples, including a story of Ukrainian soldiers on Snake Island who were feared to have been killed in a Feb. 24 Russian attack later being reported as “alive and well.”

Cawthorn, who is running for reelection in the state’s westernmost district, faces a string of primary challengers.

One of his 11th Congressional District opponents, Michele Woodhouse, called the comments about Zelenskyy out of touch and “boorish.” She said she considers Zelenskyy “a hero.”

, who is taking up a more ideologically centered lane in his primary bid against Cawthorn, clapped back on the congressman’s remarks.

“Let’s be clear. The thug is Vladimir Putin,” Edwards wrote on Twitter. “We must unite as a nation to pray for President Zelenskyy and the brave people of Ukraine who are fighting for their lives and their freedom. Anything less is counter to everything we stand for in America.”

A national Quinnipiac University survey of U.S. adults released this week found that 64% of American adults have a favorable opinion of Zelenskyy, with 29% saying they haven’t heard enough about him and only 6% having an unfavorable opinion.

Among Republicans, 61% reported a favorable opinion of the Ukrainian president, far above the 6% share with an unfavorable view. Thirty-one percent of Republicans said they hadn’t heard enough about Zelenskyy. The poll had a margin of error of 2.6 percentage points.

On Thursday, state House lawmakers unanimously passed a resolution in support of Ukraine by a 112-0 vote.

, a Cabarrus County Republican who is among the most right-leaning members of his party, said North Carolinians should support Zelenskyy.

“I’ve heard people criticize Zelenskyy and talk about how he’s no good either and that sort of thing,” Pittman said during a floor debate. “Well, I don’t think he’s near as bad as Putin. Right now, he is fighting for his life and the life of his people, and I’m glad to see us stand up and support that.”

The resolution in part says the chamber “stands in solidarity with the people of Ukraine as they fight for their freedom.” It was brought forward by GOP House Speaker

“There can be no moral ambiguity about where we should stand,” Moore said.

Some Republicans have found themselves in an uncomfortable position on the matter after former President Donald Trump last month called Putin “smart” and “savvy.” North Carolina U.S. Rep. Ted Budd, who received Trump’s endorsement for a U.S. Senate race, subsequently described Putin as “evil” but a “very intelligent actor.”

“I don’t compliment our enemies,” McCrory said in his ad. “I stand for truth and freedom.”‘

Jonathan Felts, an adviser to Budd said the congressman “presented the sort of level-headed assessment of a foreign crisis you would expect from a U.S. senator” and likened McCrory’s ad to “empty soundbites.”

These Guys Were All in Talks to Beat Up Timothée Chalamet in Dune: Part...

A Couple of Points About Online Marketing